It’s morning here.. So good morning guys. How have we all been doing? Hope it’s been an amazing year for us?

I know that I suck at consistency and commitment. It’s been so long since I’ve been here and there’s been a lot that has happened. I have great plans for Teenbeauty this year but first of all, I think I’d be taking this site down and start afresh.

You may want to know why? it’s because I just feel the need to. Teenbeauty has not been serving it’s purpose maximally and I really and sincerely want to correct that. The moment the goal for creating Teenbeauty is missing in it then there’s no point of the blog anymore.

But if you think otherwise,let me know. I’ve not completely made up my mind yet. I could just start something new instead of totally taking it down. Let me know what you think guys!!

Hi guys! It’s been so long since I came here. You must feel like I don’t take my blog serious or I’m not consistent. Whatever you say, you might be wrong and you might be wrong. I’ve been up and down with a lot of things; life issues, school, preparation for exams, hustling and bustling. It’s been stressful.

I don’t think I’ve posted anything since this year started so Happy New Year to you guys. This is a new year and we are gonna start something new.

I have some series in mind for us so we can rub minds together. This post is just to say I’m Alive, Hale and hearty. And so is Teenbeauty.

We are coming back stronger!! Cheers! Love you guys!

Guys… Happy New Year!! I missed you all. How have we been? How has the new year been for us? Let’s talk!

I really want you guys to read this and tell me what you think about it. I will talking on that issue for the weekend. 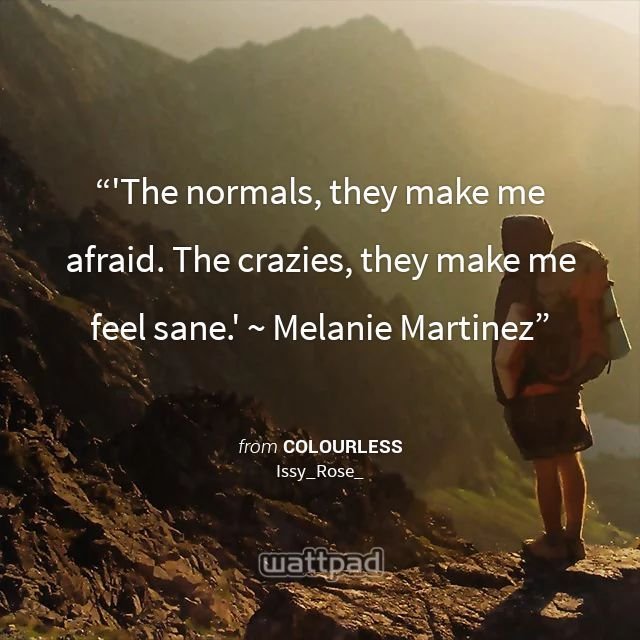 I got this picture from a story I read on wattpad and you guys could give it a try if you want; I think you’d like this story: “Colourless” by Issy_Rose_ on Wattpad https://www.wattpad.com/story/68241406?utm_medium=org.wordpress.android&utm_content=share_reading&utm_source=android

So while I was reading, this quote caught my eye and I saved it. I’ve seen different teenagers worry about being weird, crazy and abnormal. They are torn between what they are and what people say they are. I saw tons of questions about this here and on Quora and I didn’t even know it had this much effect. So I’m gonna be answering this question generally.

I have said it overtime and I’d say it again, no one is normal and no one can ever be normal. If everybody was normal then this world would be so boring; same kind of people, same mentality, same mindset, same mind, same opinions, same ideas, same thing. If everything is white, then it’s white; if it’s black, then it’s black. Nobody is thinking different, nobody is creating something different, everyone is the same. That’s even more madness in itself, creating one thing repeatedly by the same process with the same outcome.

Normal is something usual, ordinary, expected… Not deviating from a norm or rule. How can you live like that?? It’s almost impossible if you’d ask me. Normality is not just a feeling or a thought, it’s a state of mind. A state of mind controls your mindset and mentality, it could either stagnate you or move you forward; it could either mar you or make you.

You’re not to be normal! Don’t let anybody tell you that… You’re to be different, beautiful and constantly changing. Normal is static, you can’t be static. It’s okay to be weird! It’s okay to be crazy! It’s okay to be abnormal. Weirdness and abnormality is a constant trait in me and my friends, they know it. I don’t walk with people who expects me to be normal, static and not changing. If you’re gonna make a change guys, you can’t be normal. Even Christ didn’t do normal things, he was far from normal. Why do you think the people were so much against Him? He was bold enough to shake their normal standards which obviously didn’t go well with them. ( I’m sorry if you think it’s not so right for me to bring Christ into this but I’m unapologetically sold out to Him. He was the one who ever loved me before anyone else ever did and He’s a part of my being so I can’t leave Him out.)

Guys, nothing is wrong with you. You’re perfectly okay. You want to be extraordinary; You want to be better; People just do something and it just doesn’t seem right to you, it looks odd and you want to change it; They tell you you’re acting weird but you just don’t flow with them, it’s not your fault. It’s because it’s who you are. Don’t let anybody tell you what you are, don’t let them set you into confusion and make you feel like an outcast. You’re not obligated to explain anything to anybody, explore yourself and your beauty. You’re You! You’re not normal, You’re You!; You’re weird, You’re You!; You’re beautiful and constantly changing, You’re You!

Cheers to Abnormality! Cheers to exploring your beauty! I look forward to a greater and bigger You!

So it’s been like two weeks since I posted here and I really missed that. I just want to share with you what I’ve learnt since I started my blog and joined Quora.

I joined Quora the same week I started this blog and I can remember answering over twenty questions within five hours if I’m not wrong. This questions were from teenagers who were desperately in search of answers to questions that seem to depend on their lives and I was really amazed. At a point, I wished I could set my eyes on them and pour out my mind to them in all sincerity. Before answering any question, I try as much as possible to read other answers to the questions and I see the way some people are misleading these teenagers just with the words they type. I just imagine somebody taking one of those misleading advise and then it turns out more worse than they expected, they wouldn’t know that the words that seemed like nothing to them is what is ruining someone’s life somewhere.

When I started this blog, I had a different notion completely but then when I checked out some site and I saw people talking in the area of calling and soon to be career. Then I told myself, “Girl, if you wanna succeed in this thing then your reason must be genuine and sincere else you’d be gone like smoke before you know it, lost in the confusion of what you’re really doing here.” Then I had a rethink and I found purpose. And I can tell you the experience here even with the absence has been overwhelming.

What am I trying to bring out? There is a purpose to everything you do consciously or unconsciously, whether you like it or not. You might want to argue this and say it’s not true. But the truth is when you do a thing without a conscious purpose, that thing will create an unconscious purpose for you before you know it and you’d be lost in what you don’t even understand. There are so many people on WordPress and Quora for whom an unconscious purpose had been created and they are just wasting their time, taking everything with levity and not knowing what their words are doing to the lives of people. While they’re others who in the midst of confusion, a positive unconscious purpose has been created for them and they themselves marvel at what they’ve been doing not believing what they’ve become.

Be purposeful about everything, you wouldn’t know who’s lost and seeking a direction for life and has no choice but to run online for help hoping to get someone who could really understand them and help them. Remember that somebody somewhere is waiting and relying on your answers or post so be sincere and truthful to them. Don’t take anything with levity, we can’t blame these people for putting their lives online, it’s not their fault… They are desperate and they will take anything they see that seem appropriate to their senses. If you don’t have a passion and purpose, don’t do it, it’s not compulsory. Nobody will sue you for that. Always remember that somehow and somewhere, you’re responsible for the pain or joy of someone.

Hi guys…It’s 12:45am here in Nigeria and I just wanna post this before going to bed.

I want us to talk about something but I’d write a couple of questions I’d be needing your answers to which would birth another post that is more likely to be in series. And also while answering this questions, you can ask your questions too and we’d talk about it together except you want me to directly answer it. Guys,one more thing… Your sincerity would be needed in the answers to this questions, it means a whole lot to me.

Here are the Questions;

1. What is the best and worst thing that has ever happened to you as a teenager or in your teenage age?

2. What, according to you, is the toughest issue to handle as a teenager or in teenage age?

3. What do you think about mental illnesses like depression, anxiety,bipolar disorder and others in teenagers. Have you ever experienced one? We won’t mind if you share.

4. If there is anything you desire right now as a teenager or when you were a teenager, what would it be?

5. What does Normal mean to you? Is it okay to be normal? Or it’s okay to be weird?

6. In your teenage years so far, what has been the easiest thing for you?

7. What is it like between You and God as a teenager?

8. What has been your weaknesses and strengths in your teenage years.

9. What do you think is the one question teenagers ask the most?

Now let the answers roll in…